The Long Night of Science ("Die lange Nacht der Wissenschaften") is one of the major science events in Jena, a fitting theme, since Jena was named City of Science in 2008 and can boast a remarkable history as a university city and science hub. We prepared a poster and an interactive game to highlight the role of the diet in shaping the intestinal flora. Furthermore, we introduce the public to our main expertise, which is Bioinformatics, and its importance and application in dealing with modern biological studies. 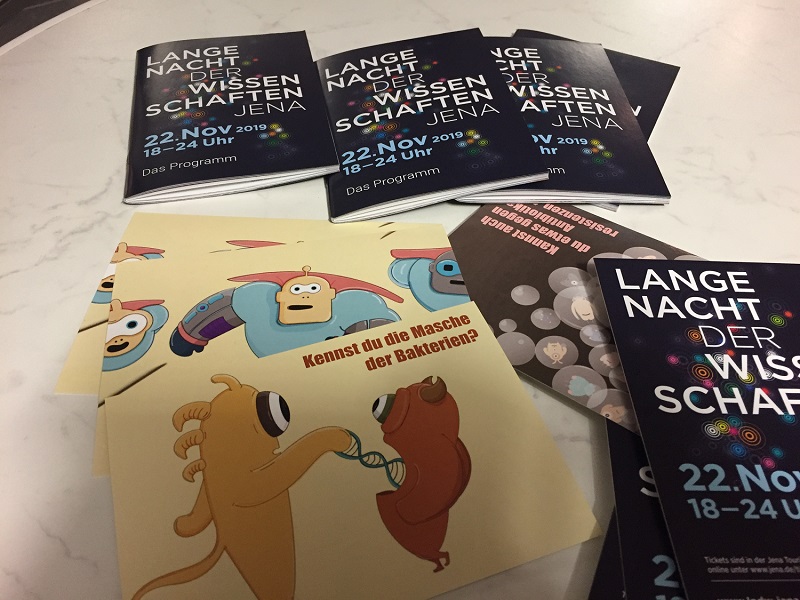 The Long Night of Science in Jena:

The Long Night of Science is one of the major science events in Jena, a fitting theme, since Jena was named City of Science in 2008 and can boast a remarkable history as a university city and science hub. The initiative is run by JenaKultur in cooperation with the Thuringian Ministry of Economic Affairs as part of its image campaign ‘Willkommen in der Denkfabrik’ (Welcome to the Think Tank). In 2005 the first of those events was held and since then, various institutes have been opening their doors to the public every two years on a Friday evening in November. These includes Jena’s Friedrich Schiller University and the Ernst Abbe University of Applied Science, the university hospital, Zeiss and the Beutenberg Campus with its many institutes and scientific research institutions. One of them is Leibniz Institute for Natural Product Research and Infection Biology - Hans Knöll Institute (HKI) where we are working in the department of Systems Biology and Bioinformatics.
In 2017, more than 9,000 visitors embarked on tours of discovery around laboratories, institutes and businesses to catch a glimpse behind the scenes. There were fascinating talks about science and research, along with numerous activities and experiments. This year 700 visited the HKI alone.
The Long Night of Science took place on 22 November 2019. Our particular goal was to familiarise people with the concept of the gut microbiome, where is it found, what is it affecting and how important is for an individual’s health. Moreover, we highlighted the role of the diet in shaping the intestinal flora. Lastly, we introduce the public to our main expertise, which is Bioinformatics and its importance and application in dealing with modern biological studies. All of this information was briefly summarised in the following poster.

We guided our audience through the poster and finished with an interactive game.

We first refer to the food we eat, as a major contributor to our gut microbiota composition. Different diets can have various influences on our flora, either promoting the rise or suppressing the growth of certain species. This has been confirmed by many studies comparing populations with different dieting habits where a significant difference in their microbiome was found.

The gut microbiome is the sum of all microorganisms inhabiting our gut. Around 10 to 100 trillion microbes exist there, there are alone 500 to 1000 different bacteria species. Their roles revolve around digesting the food, regulating our immune system, protecting against other bacteria that can cause disease, produce vitamins and many more. The alteration of the microbiome can lead to several diseases as different substances are produced by the different communities in our body. Some of these diseases studied so far are depression, cardiovascular diseases, non-alcoholic fatty liver disease (NAFLD), obesity and rheumatoid arthritis. When talking about the microbiome, we always refer to the community level and not on a single species, which results in having to deal with a huge amount of data that need to be analysed. A task particularly complicated and nearly impossible to be examined in the research laboratory only.

So how can the microbiome be studied in a large scale? This is where bioinformatics comes into play. The primary goal of bioinformatics is to increase the understanding of biological processes. It combines biology, com-puter science and statistics to analyse and interpret biological data. A bioinformatician’s job is to develop and implement computer programmes that enable efficient access to, management and use of various types of information. Moreover, development of new algorithms (mathematical formulas) and statistical measures that assess relationships among members of large data sets. Meta-omics is the study that focuses on analysing the relationship and interaction of various types of molecules, like genes, metabolites and proteins, and is one of the main foci in this field of life science. One good example is the gut microbiome analysis which, as mentioned previously, deals with an immense amount of data generated from all the microorganisms and their interactions between them and our body.

We prepared an interactive matching game on a white board to complete the vist at our station. There are 3 columns of information, each one containing 10 factors, on the white board: one with bacterial species, one with genes and lastly one with metabolites. Individual factors were depicted in different colours. The goal of this game was to connect the elements of the columns with the same colour to show the correlation between species, genes and metabolites. The connections were not one-to-one but complex in order to highlight the multiple correlations of a species with many genes that can later affect the production of different metabolites. The players generated a 2D network of interactions. After finishing the game, a 3D image of a full interaction network was displayed on a monitor next to the board, in order to show the complexity and the completed result of such analysis in real life. The take home message of this was to let people get a grasp of the workflow and the mind set that bioinformaticians follow when dealing with such data. Additionally, the necessity of using informatics tools to unravel such relationships was shown as it is simple enough to draw a network on the white board, however when dealing with gigabytes of real life data, analysing them manually is not an option.

Closing Remarks
Finishing this workshop, the audience were given a souvenir handmade bookmark containing the name of our group at the HKI on one side and on the other side the first 5149 characters of the genome of Escherichia coli, to give them an idea on how exactly the data that we are working with look like. We hope that after joining this workshop the audience can be more aware of terms such as microbiome and bioinformatics as nowadays they are considered to be very popular fields in biology.